In case you haven’t noticed, there’s a clear theme to my methodology lately: student engagement. You can be the best teacher in the world, but if the students aren’t listening, you’re wasting your effort. And I hate wasted effort.

I’ve found that technology is a great way to increase engagement. It, like all things, has its drawbacks, and I, like all teachers, have struggled to use it effectively. But these past few weeks have really been eye-opening to the possibilities of using technology beyond simply having students submit their work through Schoology (though Schoology’s discussion posts can be great for getting those quiet kids to participate freely in discussion, and they’re perfect exit tickets).

The second way I’ve realized that I can really get students engaged is just getting them up out of their seats. Now, you can’t just tell them all to stand up and move around without a purpose, but giving them a task that requires them to move around, even if it’s just relocating to a new part of the room, gets them engaged and leaves them no ability to hide at their desk. I’ll be honest, I am only one teacher and they are many students. When we’re doing deskwork, there have been times that a kid managed to get away with not actually doing any of the work, and I didn’t realize it until after school. Getting them up and moving around makes it more obvious if kids try to not participate. Honestly, from what I’ve seen (especially in my Persuasion Matchup activity) when the students are moving around, they don’t want to not participate (sorry about the double negative). They want to work!

Taking these two major ideas, technology and movement, I decided to try a new tool in my classroom today: Quizlet Live.

If you’ve been following my blog, you’ll know that my students are reading Lord of the Flies. Last week, they finished reading chapter 11. I’m tired of giving pop quizzes and discussion posts to see if they read, if they understood, etc. They work, but they’re boring (for the students and for me to grade), and they don’t help the students who didn’t understand do anything but realize that they didn’t understand.

In a recent department meeting, a guest showed us how to use Quizlet Live. I’ve heard of Quizlet before but hadn’t really explored using it because it appeared to basically be online flashcards. As cool as they are, I don’t teach a lot of memorization; English I is focused mainly on skills like inferencing or finding author’s purpose. But it’s perfect for the novel. And what’s even better, someone already put together questions for Lord of the Flies chapters ten and eleven. Less work for teacher.

I’ve mentioned before that my school is technically 1-to-1 with tablets but I don’t usually have more than a third of the class with actual functioning tablets on any given day. Since this initiative began, I’ve struggled with the cell phone question. Do I force students to only use their tablets? What message am I sending if they can ignore their tablets and use their cell phones for activities? Last week when I did the QR Code Extravaganza, I only allowed students with tablets to participate, while the rest did a boring paper assignment. If you saw that post, you’ll know that it was a frustrating experience (and if you didn’t, you should totes go check it out!). The biggest realization I had from that tablet-only experience was that many of the students weren’t missing their tablets out of their own laziness or neglect. I have one student whose tablet has been held hostage by the tech room for months. A couple others had legitimate internet connection issues that went beyond my troubleshooting skills. Many of them still don’t bring their tablets because the majority of their teachers don’t use them – in some cases, I’m that student’s only teacher asking him or her to bring the tablet every single day. As frustrating as it is, I do understand not wanting to carry it around when only one class requires it, and even then it’s not used every single day (but don’t tell them that!).

The conclusion I was forced to come to is that the technological device is not more important than the learning. Yes, I wish I could get every students to bring a tablet to school every day, but as teachers, we know that we have to choose our battles. If I want 100% engagement with Quizlet Live, I was going to have to allow cell phones. I’m glad I did.

For those who are not familiar, Quizlet Live starts with a set of terms and definitions (or whatever you put in the terms and definitions boxes). Students use an access code on the projected on the board to get into the game. The website automatically shuffles them into groups based on the total number of students. First period only had 8 students so it created 2 groups of 4 student. Third period had 23 students so it created 5 groups of 4 and a group of 3. Each group gets an animal as their mascot.

Let’s take one group of four students. Twelve of the answers appear on their screens – three answers to each screen. All four screens show the same question. The goal is to find the correct answer out of each of the four students’ screens. The board shows a progress bar for each team. As they get answers correct, that answer choice disappears from their screen and their bar moves across the board. If they get a question wrong, they go back to zero and all of their answer choices reset. The first team to get all 12 in a row correct wins. 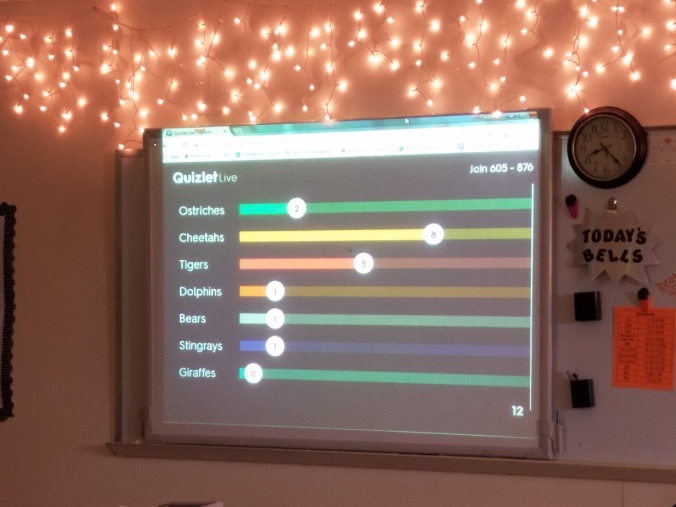 The scoreboard during second period

Let me give you a tip: whatever you put for the definition is what shows up as the question. The terms are the answer choices. My poor first period had to play the game Jeopardy style because I had the questions and answers reversed. Their screens showed an answer and they had to choose the correct question. This actually ended up working as a cool way to add difficulty to the quizlet. I saved two versions of the set, and as the students started to win faster and faster (as they learned the answers), I switched them to the Jeopardy style set. They had to think a little harder and really focus on the information to get the answers right.

One of the really cool features is that you can shuffle the groups between each round. You can keep the same groups if you want, but I chose to switch them up every round. This got them up and moving as well as forcing them to work with a wide variety of students in the class.

I decided to also use Quizlet Live for my RTI period. I had 9 students (of the 14 selected) come to my classroom for extra help. We’re getting very close to the big scary state test, so I decided to help them by focusing on vocabulary they need in order to successful on the test. Thankfully, someone had already created a handy set of 27 terms from the English I STAAR that I could use.

This worked well for this period for a slightly different reason than my regular classes. The students present were largely unfamiliar with the terms. Generally, flash cards are used to study material you already know, but this worked amazingly well for learning new material. The first round took quite a while before someone managed (with some teacher help) to get 12 in a row. I got to witness something awesome in this class. As we went through the second, third, and fourth rounds, they were starting to remember the meaning of terms they had never heard before, and even better, they wanted to remember what the terms meant so they could win.  A little competition goes a long way.

Of my students said today, “Miss, I think you’re the only teacher that actually tries to get me to do my work.”

3 thoughts on “Let’s Get These Kids Moving!”

Diary of a Tech Teacher

Reflections on Technology and Education

Doing me the best way I know how!

Sharing the Love of Books

Informed by Research, Inspired by Practice

Classroom Ideas and Strategies for Teachers from Tom Mullaney

Life Stories and Beyond

Optimizing Learning for All students

Musings on the power and promise of technology in education